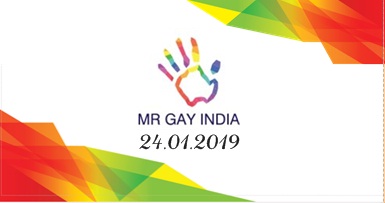 Since the inception of Section 377 by the Indian government, LGBTQ community has gained an officially respectable stature in the society. More and more people are coming in to support them, standing up for various causes which includes their participation and contribution and also invites people to know more about them. But something which has changed a lot and has driven itself to a more outward approach, rather than an orthodox approach is that of beauty pageants in India. With Miss India or Mr India pageants being organized inviting participation from all the young men and women of Indian citizenship, beauty pageants like Mr Gay World India (MGWI), launched in India in 2014, has carved a path for more invitations from LGBTQ community. Even the director of the pageant, Mr Sushant Divgikar carried the poised yet sheik drag queen alter ego Rani Ko-he-noor at the pageant. [caption id="attachment_1027" align="aligncenter" width="450"] 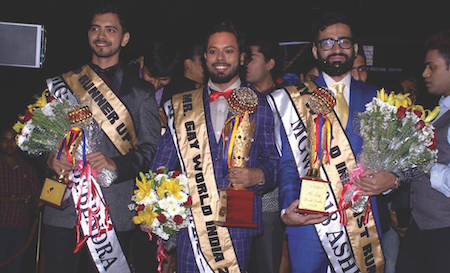 From left Debendra Nath Sanyal, Samarpan Maiti (Mr Gay India 2018) and Ashish Chopra[/caption] This beauty pageant is not restrained by age, gender, physicality or color. Instead, it aims to bring those communities out which have mouldered inside closets. While walking down the ramp in bright eye shadows and dark lipsticks, many in the LGBTQ community have found both a face and a voice. Though transgender models have been showstoppers for many designers, many have forayed in the world of glamour and fashion and are settled, gay title holders such as MGWI are now gaining popularity and job offers too, the way MGWI 2016 Anwesh Sahoo has made a path for himself since the time he has won the title. Being the youngest title holder, Anwesh Sahoo has got work as a designer at Godrej Culture Lab, a Medal of Pride honour, chief guest invites and even a picture of his winning the title being put up on the engineering college website from which he graduated. Speaking at TEDx speeches, sometimes reading the hurtful comments makes him feel that the word gay is still a cuss word in India, though he believes that, “It is as difficult and beautiful to be a gay in India as it is to be a human in India”. This year also, in 2019, MGWI 2019 participation witnessed contestants coming in of different variety including Varun Shinde, a college principal performing nine yard sari to Arjun Das, a fashion designer from Kolkata. But the 32 year old Suresh Ramdas won accolades and the pageant when he answered to eliminate discrimination on the basis of color to the question as what he wants to change about himself. This tall, dark and handsome Bengaluru based techie had always been discriminated due to his mahogany color which he used to cover with loads of fairness creams but uncovered when it came to the pageant and the title of Mr Gay. Even the Lakme Fashion Week has had gender neutral models walk the ramp like other models for shows such as the Drag Show and one of the models, named Anjali Lama who is a well-known face in the world of fashion and transgender modelling. All in all, the involvement of the LGBTQ community in the world of beauty pageants in India has been a tough yet inspiring journey, worth remembering and cherishing. Bearing criticism from both the family and the society, and then making a name for yourself in a world which is primarily dominated by only straight people,  it is a struggle which has made this community to fly with bright colors and come out as individuals who deserve respect and equal opportunities as others. Though the path is still not full of roses and more so a path of thorns, the way will power and talent drives people out of gloominess, similarly, this community is rising out of the barriers set by the society. Challenging the norms set by society, they are making a name for themselves. Getting job offers from big enterprises, paid performances, show invites, Guest of Honour awards, all this is pouring in, and major credit goes to the changing reign of beauty pageants in India. Transgender model Namitha Marimuthu and aspiring model Navya Singh and a lot of other people of the community still hope that they too would one day stand as women at Miss Universe pageants like the other women who yearn to wear tiaras and bring about a change in the world. What we as individuals can actually do for them is to come forward and put their best put down is to support them in the way we can, not insult them for who they are and how they are and also to pledge towards a non-biased system across the nation, including beauty pageants. They too are humans and deserve the same respect and stature in the society as we do. But wait, readers, If you want to foray into the world of fashion, then there's no better place than https://www.apkaabazar.com/fashion/ Do check them out and flaunt yourself!